Pulling Out All the Stops – The Lost Cinemas of Liverpool

David Nicholas has cinema in his blood. This very popular organist has been in attendance at the Philharmonic Hall for more than 20 Years making him the longest serving resident organist in the history of the Venue. He is a sparkling part of their Classic Movie screening, magically warming up the audiences with every feature.

David was born opposite the Plaza Cinema in Birkenhead and from an early age, gained a reputation for playing the organ. His first memories of being interested in organ music were the recording that the late Ken Griffin made for Columbia featuring the Hammond organ.

He was the organ and piano demonstrator at Rushworth’s store in Liverpool for two decades.  He say: The Philharmonic organ is a Rushworth classical pipe organ and it did pose a bit of a challenge at first.  But audiences have fallen in love with it when the great machine rises, like the screen, majestically from the floor.

David does have some regrets. “I never see the last ten minutes of all my favorite films.”

He is proud however that he has never missed a night of the Classic Movie shows in 20 years.

Please scroll down to view videos 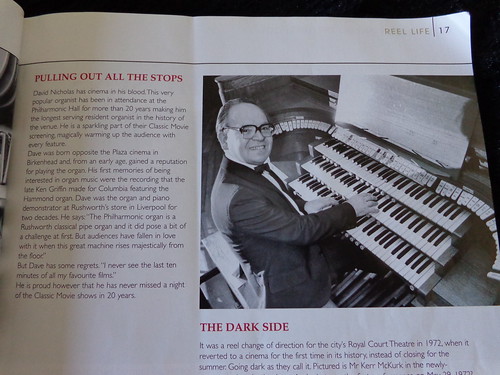 David tells the history of the Wurlitzer organ in Liverpool cinemas

Celebrating 50 years at the Organ David shows his prize possession