The name Electra Palace was given to this cinema when it first opened on May 30th 1911.  Opening with continuous performances from 2.pm – 10.30pm, with admission fees 3d, 6d and 1/- for children, half price.  Like many other cinemas of this time tea was served for those patrons paying 6d and 1/-.  The Blue Hungarian Band accompanied the performances.  Although the Majestic had opened a little further up the road in 1914 the cinema was still popular.  1917 saw the cinema change hands and the name changed to the London Road Picture House, shortly afterwards under the same owners, the name was changed to the Alhambra.

In 1932 the cinema was taken over by Regent Enterprise’s Ltd and was given a new look costing £15,000.  The capacity was increased from 580 – 820 and when work was completed it was given the new name, the King’s Picture House. A grand opening with the Lord Mayor present took place on 13th October 1932, the film was The Silent Voice starring Geroge Arliss, admission prices were now 1/3  for balcony and 1/- for the stalls.  By 1937 the Kings was not well attended due to competition from nearby cinemas.

1954 the cinema was taken over by the Essoldo circuit with yet another name change. CinemaScope was installed in 1955 with a performance on 30th May 1955 of Broken Lance, starring Spencer Tracey.  The Essoldo began showing X rated films because Rand and Fox where in dispute over film bookings. However, Chisum featuring John Wayne was shown on 1st April 1972. 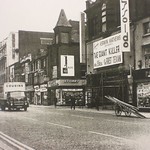 This cinema had the greatest number of name changes on Merseyside and so in 1980 was known as the Eros and for the final year as a cinema it continued to show X certificate films until it was closed by the council because of the type of films it was showing.  Several years later it was demolished. 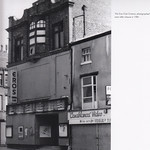 One thought on “Essoldo / Eros”