The Picture House was the cities first purpose-built cinema and also the longest surviving. The Grand opening day was 16th September 1912, in the announcement it was described as the finest in the kingdom with a luxurious cafe lounge and the performances accompanied by a full orchestra. Showing was Caesar Borgia and One Round both with continuous performances from 1pm-10.30pm, admission prices 6d and 1/-, children half price till 5pm.

With a Georgian-style frontage, a short flight of white stone steps lead to two pairs of glass doors which opened into the main entrance and the foyer.  The flooring was of black and white tiling and walls covered in Sicilian blue and white marble.  This cinema had a lift, an unusual feature.  A notable amount of architectural features adorned the walls, reminiscent of a live theatre. With an audience capacity of 1,029 stalls and circle. 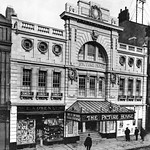 Futurist – Lime Street In 1920 the new company Futurist (Liverpool) Ltd was formed to purchase the cinema and the two shops on either side for the sum of £167,000. The property was leasehold for 75yrs and so the Futurist and the adjacent Scala cinemas were now both controlled by the Levy cinema circuit. With the invention of the talkies in 1929, Western Electric sound equipment was installed.  Opening on 2nd September, with the All Talking, Singing, Dancing feature film, MGM’s Broadway Melody, starring Anita Page, Bessie Love and Charles King. In the late 1930’s the Futurist experienced competition from other cinemas close by, with attendances declining and on top of this both the Futurist and the Scala suffered bomb damage, forcing closure in May 1941. Out of the two cinemas the Futurist was first to re-open with The Ghost Train, featuring Arthur Askey, and The Man at the Gate on 16th June. The cinema regained popularity in 1954 with the new installation and screening of Liverpool’s first CinemaScope film of King of the Khyber Rifles starring Tyrone Power. In May of the same year, 1954, without closing, extensive alterations were made, not only did they improve the seating for better site viewing of the screen but also new stereophonic sound speakers were mounted around the walls of the auditorium.  Showing continuous performances of first runs, all was good for the following 6 years. On 2nd April 1960 ABC took over and spent further monies on modernizing it with new seating, reducing the seating capacity, and the latest projectors, the Philips DP70 35mm and 70mm, for the opening of Oklahoma in TODD-AO. Business was excellent, with performances doing longer runs, the bar was now licensed and sold refreshments. With the first of it’s kind ‘Sensurround‘ sound a new novelty in 1975, the Futurist became the only cinema in Liverpool to have the system installed, the first film performance of Earthquake in 70mm starring Charlton Heston and Ava Gardener, which began a 16 week run however the system proved to be a temporary novelty with the less successful Sensurround films being shown over the next 4 years. With almost 70yrs long history the Futurist closed on 17th July 1982 with Blazing Saddles with only 100 patrons in attendance.

At 92yrs, Ellenor remembers the first silent movies and how some good silent Actors were replaced when the ‘talkie’s’ arrived.

Pat Grace talks about Mayfair, Rivoli, and she went to see the Blob at the Futurist and other horror movies

Alf Mahon – Cinema Projectionist of the Ritz says “The Futurist cinema will be demolished to make way for new buildings that will make money. The cinemas themselves were once new build or converted from old places of worship by people with the very same attitude as those today. “To make money”. There was nothing dewy eyed about the cinema owners, it was to make money or close it down if not. The people working for low pay in the cinemas of the time may have felt they were in some sort of elite group, but in the end it still came down to one thing, “Money!”

Eric Norgate – at the Museum of Liverpool 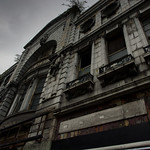