The Gaiety dates back to May of 1913 when its grand opening was advertised in the trade publication Kinematograph Weekly.When it opened this cinema had a capacity for 1000 patrons between the stalls and overhanging balcony.

No much is known about the early years of the Gaiety other than it was opened by the independently operated Gaiety (Liverpool) Ltd In the 1930’s and an RCA sound system was installed; then it was sold to Byrom Picture House Ltd, operators of the Prince of Wales cinema in Liverpool.

The Gaiety ran daily matinees as well as two evening shows for 4d and 9d, low prices for the time period. By the 1950’s prices had risen to a still fair 7d and 1/-.

The cinema lasted until 1960, closing its doors on the 14th of May after its final screening of That Kinda Woman and Thunder in the Sun. Later, when the area was being redeveloped, the building was demolished. 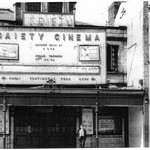