The cinema was first owned in 1909 by Provincial Cinematograph Theatres Co, who were known for their high standards in luxury, elegance and comfort; a notably feature throughout their other cinemas being tip-up seats.  The design of the building was described as an ornamental and notable addition to the existing cinemas. The entire building was designed with some pretensions of grandeur.

There were two pay – box’s one either side of the main entrance, two large glass double doors lead the patrons into the foyer, the walls were oak panelled. The rear stairways lead you to the Wedgewood cafe on the first floor, that served light refreshments to both the audience and the general public.

The seating capacity was 700 with an unobstructed view of the screen, as the ground floor were raked and the circle was stepped.  The cinema also had the modern ventilation system giving out a change of air every 5 minutes thus maintaining an even temperature throughout the building.

The owners of this cinema were acknowledged to be superior to most, not only were they erecting cinemas in most leading cities but were particular noted when exercising their taste for subjects within their programmes.  Covering a wide variety of subjects that were educational whilst entertaining,  drama, comedy, travel, history, national history and the news of the day in pictorial form.

However as with all of the cinemas, they changed owners and in 1941 the cinema was renamed Prince Of Wales

The cinema was renamed in 1914 to Prince Of Wales after previously being known as the Liverpool Picture House.

It opened the doors early evening at 6.30pm with admissions 6d to stalls and 1/- to balcony with continuous performances after this until 1923.

In 1929 talkies were introduced with a change of ownership, Savoy Cinemas of Oxford Street, London.  A BHT sound system was installed and on 30th September 1929, opened with The Trial Of Mary Dugan, sceened at 4 separate performances.

The cinema changed hands once again in 1936 to Stanley Grimshaw who was connected to several suburban cinemas. He made several improvements with the sound equipment and brighted up the front of house by giving it a glow with neon lighting. Also changing the programme  to show more news and feature theatre.

The programme stayed this way until it changed hands once again in November 1946 and closed the doors for a short spell.  It reopened on the 17th December 1946 as the Liverpool News Theatre, which was in direct opposition to the Tatler News Theatre on Church Street. 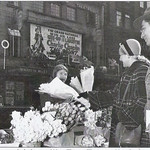 This cinema opened on 17th December 1946 as Liverpool News Theatre, the seating capacity however had been reduced to an audience of 561 patrons.

After one year the cinema changed name once again to the Jacey Film Theatre, with a similar film booking policy until it’s final performance on 7th July 1972 with Don’t Deliver Us From Evil and The Subject Is Sex.  This was in stark contrast to the films of 60 years previously.

The building was then converted to a Church – The Shine of the Blessed Sacrament.  In 1986 it was demolished due to major redevelopment scheme including Clayton Square shopping precinct.

“The Tatler and News Bar was all through the day” 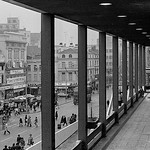