The first iteration of the Majestic Picture House was opened on the 11th of June, 1914; it was constructed on a plot between Daulby Street and Boundary Place near the outskirts of the city center. When she was first opened the Majestic could hold 870 patrons and this was later expanded to 1,109 seats in 1927 when admission was high. Films screened nightly from 2:00pm to 10:30pm with prices at 3d, 6d, 9d and 1/-.

The 1920’s was also a time of competition from other large cinemas popping up around the city, such as the new Trocadero, and by the mid-thirties additions like the Paramount and ABC’s Forum overshadowed the Majestic all together.

In 1937 the proprietors, Majestic Picture House Ltd., applied to the city of Liverpool to demolish the existing theatre to make way for a brand new 1,800 seat super cinema. The plans were accepted and the process began immediately with the last screening occurring on the 3rd of April. Just under six months later, on the 2nd of October, the new Majestic opened its doors.

The renovations, expansions, and technological updates cost between £30,000 and £40,000. The New Majestic Picture Palace sported a 75ft tower with the theatre’s name on the outside and a large canopy over the three pairs of doors which made up the main entrance. The auditorium included a new, large proscenium with a silver satin curtain over the screen and crimson side curtains.

The new Picture Palace was a success and received regular patronage for over a decade. By the 1950’s however the Majestic was a second run theatre again but ran continuously during the 1960’s.

The theatre finally closed on the 27th of June, 1970; the last film screened was The Birds.

Not long after the Majestic closed the building was torn down and a new hospital was erected in its place.

“We only ever had enough money to get into the pictures, so we used to have to walk to the Majestic”.

You can play each gallery by clicking on Start, and if you want to see the full sized photograph click on it’s title beneath each photograph. 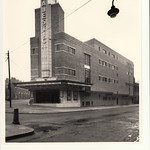 One thought on “Majestic”