The building that housed the Mount Pleasant Hall was originally constructed in the middle of the 19th century as a Wesley Chapel.

In 1908 it was acquired by New Century Animated Picture Co., managed by Sydney H Carter. The company controlled many theatres, including an interest in the 3000 seat St.George Hall in Bradford.

In order to convert the old building into a cinema a 700 seat, stadium-style auditorium was constructed on the first floor. When it opened on the 14th of December it was the first organised cinema in the Liverpool City Center.

The opening was well received and the new cinema was praised for well arranged seating, fantastic decorations, and the entertainment, both films and orchestration, was of the highest artistic quality.

In those early years the picture changed once a week and screen twice daily, except for Saturdays when there were three shows a day; admission was 3d, 6d and 1/-.

In the mid 1910’s the Lime Street Picture Co., became joint owners of the cinema after having recently constructed the first purpose-built cinema in Liverpool. Then in March of 1928 ownership changed to Denman Picture Houses Ltd. When the cinema re-opened under new management in December of 1928, as the Century Cinema, it was given a new identity as the “Home of Unusual Films.” The feature films when it first opened were Cinderella and The Lost Moment. Other famous continental films that they screened include; The Last Laugh; Faust, both starring the great Emil Jannings; The Waltz Dream; and Dr. Mabuse by the influential German-born director Fritz Lang.

As for many cinemas, the end of silent era brought economic hardship to the Century Cinema. Audiences for silent pictures were waning as masses flocked to the new sound cinemas.

In February of 1930 the cinema closed with a final performance of the German film Conscience. After the cinema closed a string of  businesses occupied the space, furniture auctioneers, a billiard hall, a carpet warehouse, and a jazz club. Then in the 1970s the old building was demolished and a car park was constructed. 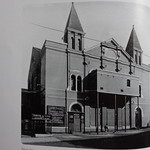