The site of this historic Liverpool cinema can trace its entertainment roots back as far as 1795 when the Christian Street Circuit opened. Over the next century the building played host to the Olympic Circus, Adelphi Theatre, Liverpool Gymnastic Club, and finally the Adelphi Picture Palace in 1911.

The first theatre was run by a Mrs. A Tarshish, wife of cinema proprietor at the Roscommon Picture Palace. During its run the cinema had some of the lowest admission prices in town, around 3d and 5d.

The original building was demolished in 1921 and replaced by a purpose built cinema which seated 1,124 people; it was dubbed the New Adelphi. This iteration lasted until 1929 when it was sold to Mortimer Dent at Standard Cinema Properties.

During the first part of the 1930s a British Acoustic Sound System was installed.

The ownership changed hands again in 1936 and continued in operation until it was sadly lost during the air raids of 1941. 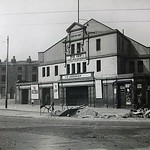