First known as the Tivoli Palace and the Grand Tivoli.

In 1845 several dilapidated houses on Lime Street were demolished to make way for road widening. Following this the Teutonic Hall was erected.  The Hall was a public space with the interior separated into two areas,  the ground floor was occupied by Allsopp’s New Crystal Palace Waxworks and the upper floor was the Teutonic Hall and exhibited Hamilton Dioramas. From the early 1900’s the Diorama had been a feature of many touring music hall programmes. Dioramas, also known as Panoramas were huge vertical scrolls with painted scenes unwound to present illuminated and changing panoramic views.

In 1859 it was converted into the Theatre Variete, under new ownership of Wilson and Montague.  In April 1863 presented the first of the Charles Christy Minstrel Shows and was to to become the most popular and longest-surviving entertainment at the Hall. In 1865 stage plays were introduced with famous actors such as Brinsley Sheridan, Charles Wyndham and Charles Dickens.

Under the same ownership in 1868, the theatre was renamed the St James’ Hall and Operetta House, with entertainment consisting of operas, ballets and plays.  However, from 31st October 1870 and for over 25 years, this was Liverpool’s home of the minstrels.

On the 2nd May 1875, the theatre was destroyed by fire but amazingly was stopped before it spread to the waxworks below.  It was rebuilt with a new name St James Hall and opened some years later on 1st May 1876.  This building as a theatre was demolished in 1898

A construction of a new theatre was built and from 23rd November 1909 was known as the Palais de Luxe, the first time known as a cinema.  This was under the control of the Weisker Bros, and was advertised as the finest cinematograph entertainment in the United Kingdom with Comedy, Drama, Sport, Science and Art, accompanied by a high class orchestra.

With continuous performances from 3.30pm – 10.30pm, patrons were advised that they could come when they liked and stay as long as they pleased. Admissions remained the same as 1907,  circle 6d and 1/- and stalls 2d, 4d and 6d with the additional service providing tea between 4pm – 6pm for patrons paying 6d and 1/-.

On 12th and 13th November 1912 was a notable film attraction of which exclusive showing rights in the city had been secured.  Described as the most thrilling and dramatic film ever to be produced and featured the sinking of the mighty liner, the Titanic, shown at the Palais de Luxe was The Great Ocean Catastrophe.

In June 1913, The Liverpool Palais de Luxe Co was formed. Under the new company the cinema became the first in Liverpool to have silent films accompanied with sound, this was made possible by the sound-on-disc system, Edison Kinetophone,  the advertisements stated:  You see the man, you hear his voice – Greatly accompanied by the Majesties the King and Queen.

Although the beginning of the 1930’s the majority of city cinemas changed to sound films the Palais de Luxe remained silent, advertising stated ‘The House of Golden Silence‘ and ‘Our Pictures are still Silent’.  The last silent film was ‘The Man Who Changed His Name on the 2nd August 1930.

Competition arose during the 1930’s with the opening of two super-cinemas the Forum, Lime Street and the Paramount, London Road, however the Palais de Luxe remained popular with good attendance.

The Palais de Luxe suffered war damage along with the three other cinemas on Lime Street, resulting in closure from 3rd May until the 9th June 1941, and reopening with Little Nelly Kelly starring, Judy Garland.

Far more serious damage was caused due to a fire that destroyed much of the interior.  A complete external and internal modernisation was necessary before re-opening. The front was covered in grey and black faience tiles. The tower was removed and the upper part featured the theatres name in neon and above the main entrance was a stainless steel motif of a motion picture cameraman.

Opening at midday 6th November  1952 with The Great Caruso, the film which made Mario Lanza famous.  However despite the improvements this was a period of general decrease in attendances, a further 2 years later during which wide screen and CinemaScope had been installed in most city cinemas, the Palais de Luxe suffered  because it was insufficient in width of screen to accommodate the new projection systems.  Having to rely on older films and those not booked by the major circuits.

The building was later demolished and the site redeveloped with shops and a cafeteria. 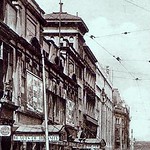 One thought on “Palais de Luxe”