The contractors for this cinema were John Rimmer & Son of Liverpool, who overcame complicated problems with the reconstruction of the building, and were congratulated for their ingenuity.

The cinema had a uniqueness, it was the managing director who decided that Liverpool needed a news theatre, at first proposed to show only world news, interest, travel, comedy and selected high dramas with programmes an hour and a half or so in duration, predicting that this would sappeal to ordinary cinema goers as well as those with less time to spare such as shoppers, business people and visitors.

A walk down a long foyer with multi-coloured rubber flooring, paired with brightly wall decorations and coloured wall panels in gold led to a pay box at the far end.  Also situated at this end was the entrance to the stall, the balcony and a refreshments area.

Total capacity for the Tatler was 600, with 400 seats for the stalls and 200 for the balcony.  The overall style was comfort and simplicity for the auditorium, with well spaced comfortable upholstered seats and nicely illuminated.

Although a small theatre, live entertainment was provided for, with dressing rooms for the artists, however there is no record of it ever being presented.

With a Grand opening on Monday 19th February 1934, came a promise from the Alderman E Russell Taylor to the city magistrates that the cinema would fulfill a real need with the special type of entertainment it was to provide, and hoped that the public would justify this with their support.

Performances were continuous from noon to 10.30pm, with the last show staring at 9pm.  Admission prices were 7d for stalls and 1/- for the balcony.

The programmes consisted of six items and always included a cartoon of Micky Mouse.  These items were: latest newsreels, followed by Pathetone Weekly, then Hollywood Premiere, a musical short in colour, New Zealand, a travelogue, an engrossing Indian drama Animal Gods, followed by a coloured cartoon Babe in the Woods and always finished with Mickey Mouse Silly Symphony.

During the war the cinema was forced to close on 27th August 1941 after a high explosive caused damage to the stage end of the theatre and to the roof.  With major refurbishment at a cost of £25,000 the result was a more modernised interior, a new auditorium ceiling, the colour scheme of cream and maroon with speckles of gold. New seating, carpets, loud speakers and heating and ventilating were installed.

With the Liverpool News Theatre ( formally the Prince of Wales) Clayton Square,  in direct competition, the Tatler continued with programmes presenting latest news and short films until closing on 25th September 1968.

The cinema reopened as the Classic Cinema on 4th October 1968, with a new an bigger screen showing War and Peace starring, Audrey Hepburn, Henry Fonda and Mel Ferrer.  However, the new programming was unsuccessful and closed in less than a year 1969 with Doctor Dolittle starring, Rex Harrison.

Known as the Tatler Cinema Club from 1969 showing uncensored films to members only, until closing 3 years later on 22 December 1972. Moving their programme to London Road to the Curzon Club Cinema.

The building was converted into a fashion store.

Two ladies having a conversation about the pictures.  They sagged school, courted, collected jam jars for money. Got bananas off the seafarers “we didn’t have any fruit – we didn’t have much but we had happy days”

“The Tatler and News Bar was all through the day”

You can play each gallery by clicking on Start, and if you want to see the full sized photograph click on it’s title beneath each photograph. 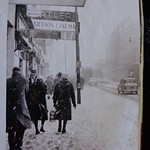