Construction on the Corona began in 1914 but was not completed until 1920 because of the First World War.

The site it was built on was known as Marsh Fields and had been purposed for a variety of entertainment such as Lord George Sanger’s circus in the 1890’s. The building’s facade was primarily white-glaze faience with emphasis on the middle section: three widows of the first floor lounge and stone carved architectural features. The cinema’s name was displayed above this in large, gold-coloured letters. Inside there were Neo-Grecian style decorations, however it has been reported that they lacked the bizarre ornamentation usually associated with entertainment sites.

When it finally opened its doors on the 21st of May, 1920, under proprietor John Johnson, it seated 1,200 people. The inaugural screening was attended by councillor William J, Jackson, the chairman of Crosby U.D.C., as well as other local dignitaries. The screenings featured an eight musician orchestra and the programme changed each evening. For the first six month the Corona was very popular and brought in audiences from a wide area. When the Regent, Crosby opened the Corona saw a fall in attendance.

Admission prices for the Corona were 9d and 1/3d for the stalls and 1/7d for the balcony. During those early days it was common for song requests to make their way to the orchestra leader. The most popular being the Corona Foxtrot. In 1930 the Corona converted to sound and the orchestra was retired.

During the 1940s the Corona was purchased by the Circuits Management Company. In 1956 the cinema was one of the first of C.M.C.’s suburban cinemas to close due to diminished attendance, possibly becuase of competition from the Plaza, Crosby in the same district. The building was in disuse for many years following the closure but was eventually sold and demolished to make room for four shops. 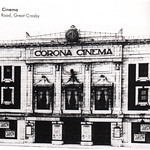 On December 11th, 1920 at 3:00pm the Regent Picture House opened. Situated approximately seven miles north of Liverpool, the cinema was in a middle class residential area. According to news reports of the time the Regent Picture House was described as one of the most elegant and largest cinemas in the area. It was also the first in the area to offer a cafe to patrons.

Inside, the Regent Picture House contained a round foyer with columns to support a beautifully carved cornice. The auditorium, which seated 1,075 people, was very long with wood paneling along the walls of the lower section and pilasters extending to more carve cornice in the upper section. Both the screen and side windows were adorned with a classic red curtain with gold lace patterning. The floors of the auditorium, including the areas between the aisles were covered with a luxurious carpet to dampen the sound of patrons walking.

The proceeds for the first night at the Regent Picture House were donated to St. Duncan’s Hostel for blind soldiers and sailors. This would likely have been a decent contribution due to the higher than average price of admission at this cinema: 9d and 1/3d for stalls and 2d for the balcony. These prices did not hurt attendance though and the Regent Picture House was the best attended in the district when it opened. In fact, until the mid-thirties, a Saturday night screening often required a reservation.

The cinema was acquired by ABC in 1935 and a short time later the cafe closed down. During the forties and into the fifties, high attendance keep the Regent Picture House doing screenings throughout the day. In 1957 the cinema switched to only being open in the evening, with the exception of Saturday matinees. The cinema closed its doors on the 30th of November, 1968 and the last screening was Barbarella starring Jane Fonda. The building was purchased by Mecca Ltd. and converted into a bingo hall.

One of the Usherettes who worked in both the Regent and the Odeon,
eventually was talked her  becoming the cashier front of house. This was a job she found difficult as first but learnt to adjust.

Many thanks to David for this recording of Sir Sydney who has along the years carved a remarkable legacy within the film industry. 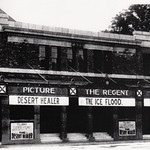