The cinema was situated at the corner of Beresford Road and Park Road. It was erected on the site of an furniture repository which had been destroyed by a fire in the early 1920’s.

It became a GB cinema in March 1928.  A fairly large suburban cinema with seating for an audience of 1,047 of which 250 were in the balcony.

The cinema was pleasantly decorated, the flooring foyer area was black and white tiles and the walls had a green tiled dado, while the upper part was panelled.

The only reference to the opening date, is the first cinematograph license on 26th January 1922.

With the opening of the Rialto shortly afterwards and also a GB cinema, was the Beresford’s only strong competition. The Rialto was running programmes of first or second runs in Liverpool of their release films and soon after they appeared on the Beresford  for 6 or 7 days run.

The Beresford survived until the 1950’s running a mixed programme but due to it’s poor situation was one of the company’s first closures.

The final programme was on 25th September 1956 with Seminole Uprising, starring George Montgomery and Not so Dusty.

The building was demolished for road widening

Dave Furlong talks about his father-in-law who was projectionist. The family trips to the Beresford “in your Sunday best” when he was a young boy. It’s only now they’re gone you miss them” 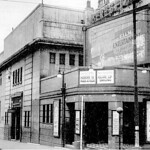 The managing director of the cinema T Halliwell Hughes, was granted the first cinemotograph license on 6th December 1912. With seating for 850 patrons it was stated in the Kineatograph and Lantern Weekly on  30th January 1913  that the cinema was  popular just 5 weeks after opening.

The life span of this cinema was short lived as was that of the Sefton Park Picturdrome because no sound equipment was installed and so closed in 1929 around the time of the talkies with the building being demolished in 1935. 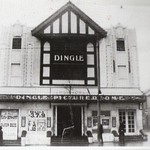 The cinema was erected on the site of the old Picturedrome after having closed it’s doors in 1931.

The new Gaumont opened 29th March 1937, situated at the corner of Park Road and Dingle Lane. The building was large and imposing offering a great source of entertainment to the population of South Liverpool.  The auditorium was wide with a seating capacity of 1,500 stalls and balcony.  The seats had upholstered backs and armrests, covered in wine-coloured velvet.  The decor had warm tones of amber, with designs finished in silver, gold and greens.  In front of the stage was an orchestra pit and also a Wurlitzer console, which remained in place up till the mid 80’s and the only one in Liverpool remaining in a cinema palace.

The projection room had two GB machines and was the first in Liverpool to  install the Western Electric Mirrophonic sound system.  It also had Westinghouse rectifiers that eliminated the use of noisy motors and also refreshed and changed the air every 10 minutes.

On opening day following the National Anthem the audience was treated to a colour cartoon, Birds of Love, then Ravenous Roger and Vocalising, a comedy followed by the GB News.  The Wurlitzer entertained during the interlude.  The feature film was another comedy My Man Godfrey, starring William Powell.  This attendance was good for this luxury cinema showing first suburban GB circuit release films.

At the beginning of the war anti-aircraft gunners were stationed on the cinema roof and took over the woman’s staff room as their quarters.  Amazingly the cinema escaped the war bombings during the blitz. However, they had a lucky escape when a land mine fell just 100 yards away in Grosvenor Terrance, near to the home of the cinema manager, Norman H. Lockett.

From the 1940’s – 1965 performances were continuous throughout the day and changed after this due to the decline in attendances.  The Gaumont was forced to close on 17th September 1966 with Those Magnificent Men in their Flying Machines.
With new interest in the 1980’s the doors opened again for special performance with the famous blind organist, Billy Ellis and Ray Curtis playing the Wurlitzer.  Sadly attendances decreased and closed for good in 1998.  The building remains unused.

“I liked James Cagney, a good all-rounder, he could sing, dance and act. I had a bet with my wife one time and I won so she had to pay for us to go the Gaumont and she’s never forgiven me” (Townsend lane) 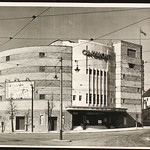 Originally built as a music hall which was erected on the site of an old coach works which opened 11th December 1894, with a variety of performances 7pm and 9pm.

As a cinema it opened on 21st December 1908.  It had seating for 960 patrons stalls and gallery, however the original seating capacity was 1,100.  The programme was Great Pictures and Class Vaudeville.  The Theatre changed it’s name to Park Palace in 1914.  The building on Mill Street had a long frontage with a glass verandah which provided shelter for the patrons.  It had two entrances one at the side for the stalls, the cheaper seats and another at front of house for the gallery, the more expensive.

The proscenium was surmounted by the Royal Coat of Arms from 1904, when King Edward VII was said to have visited the theatre.
Artists including George Formby senior entertained here.  A seven-piece orchestra gave musical accompaniment up until ‘talkies’ arrived on 8th January 1930.  The cinema was well attended in the early days however suffered with strong competition near by like the Rialto.  With the rising of admission fees the elderly were low in attendance however for children it was still only 6d.

The cinema closed on 11th March 1959 with the programme, The Young Guns, starring Russ Tamblyn and Hold Back The Night, starring John Payne and Mona Freeman.

“I used to go to the Park Palace”

“My Grandmother born in 1875 went to the Park Palace, she used to describe what it was like inside and told me a story I’ve never forgot”

“I worked at Vickers Armstrong Ltd making the Wellington bombers – and we were not allowed to tell anyone what we were doing. You could go to the cinema for halfpenny, we’d get a half packet of broken biscuits and stale cake for us to share, we had no bananas because the war was on”. . 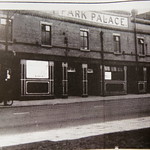 A purpose built, stadium type cinema and similar to Kensington Picturdrome had seating capacity for an audience of 870.

The first cinematograph license was granted on 6th March 1914. Silent pictures were accompanied with a small orchestra. With the successful application for a live entertainment in 1927 the Picturedrome became a lively place to visit.

On the 9th June ‘talkies’ arrived with Gloria Swanson in The Trespasser, which at most cinemas ended live entertainment.

Admission fees were 3d -9d with a daily matinee and continuous performance from 6.30pm. Although this cinema survived the bombings it was modenised in the 1950’s and changed the cinemas appearance.

The ‘Jamie’ as it was know locally closed on 5th March 1960 with a double feature, The Mating Game starring Debbie Reynolds and Tony Randall.  The building was later demolished due to new road works. 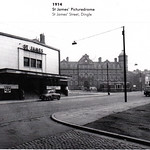 One thought on “Dingle”