Robert Wilkinson from Birkenhead sought planning permission to build a cinema on the Dovecot housing estate in January 1932.  It was supported by the fact this was an entirely new district with 1,000 corporation houses already built and approximately another 4,000 were to follow. It would be adjoined to a shopping area and was just 6 miles out of the city.

Situated in Dovecot the Granada Cinema would be an outpost of the entertainment industry.  It has a similar look to the Carlton in Tuebrook, the architect  A. E. Shannan designed them both, most noticeably the foyers and entrance.

The build cost a mere £40,000 and the style was fitting with the nearby properties.  It could seat 593 patrons on the balcony (the posh seats) and 1,210 in the stalls.  All the seats were covered in green Lister moquette ( carpet). The waiting lounges were plush too, the floor was covered in Marblcote, the columns and doors  tastefully painted in orange, red and black and the furnishings consisted of large green sofas with matching tables, the 3  large pendant lights added very much to the atmosphere. The auditorium was also impressive like all modern Super -Cinemas.

The Granada opened as a talkie theatre on Christmas Eve 1932 with a Mickey Mouse cartoon, Universal Talking News, commentary by RE Jeffrey, followed by Ideal Cinemagazine and Northern Lights, the screen version of Courtauld’s Arctic expedition.  The feature was The Rosary.

In the early days performances  were shown continuously,  double features and pathe news. Saturdays with the 3 distinct performances 3pm, 6.40pm, and 8.45pm.

In 1954 CinemaScope was installed and by the end of the 1950’s the audience declined.  Early 60’s  Bingo became popular and the Granada ran it’s last programme on 30th September 1961 with Gold Of The Seven Saints.  Reopening shortly afterwards as a Bingo Hall.

The Granada Cinema in Dovecot was another one we went to

“I used to go to the Granada on Saturdays and watch Billy the Kid, Flash Gordon, Zoro, Roy Rogers, “ 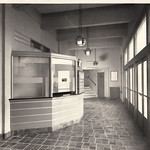