The Albany was built in a residential area 7 miles north of the city centre and was the first cinema in the area. It cost £100,000 to build and designed by Alexander Webber also the designer the Phoenix in Wallasey, difference being the Astra could seat 500 more patrons with and audience size of 1,586, stalls 1,070 and circle 516.

This cinema was the first opened in 16 years and because wide screen cinema had since been introduced it did not include a proscenium. The picture size could be increased if needed from normal 34ft to CinemaScope width of 47ft. There was a stage 8′ deep however it was not for ‘live’ entertainment more for the modern look of cinema.  Curtains adorned the stage and were in keeping with the grand cinema colour scheme of red and gold, colours that blended well with the general decoration.

It opened on 21st July 1930 with Innocents of Paris, starring Maurice Chevalier, British Movietone News, and song cartoon. Evening performances were continuous from 6.30pm with a daily matinee at 2.30pm with admission of 1/3, 1/10,  and 2/4.  The first Saturday children’s matinee was 5th October 1955 with admission 7d, 9d, and 1/-.

A Sunday license was granted on 15th April 1956, when the first programme of old films for Sunday only was shown once at 8pm.  Surviving as a single screen for 20 years until CinemaScope was introduced and was one of the largest on Merseyside showing block busters like Sound of Music and South Pacific in the 1960’s and in the 1970’s Enter The Dragon and King Boxer, starring Bruce Lee.  What is also worth noting is that this cinema had the distinction of a performance by the ‘Beatles”

The cinema closed and reopened again in 1975 as the Astra with a conversion, housing two auditoria each with 193 seats and a Bingo Hall occupying the rear half of the building.  After a spell bingo admissions declined the owners thought their future was in cinemas and converted the hall into cinemas 3 and 4 with a grand opening of Cines 3 and 4 took place on 20th December 1981 with Assault On Precinct 13 and Halloween in number 3 and in Number 4 One Flew Over The Cuckoo’s Nest starring Jack Nicholson.

The Astra came under the ownership of the Apollo Leisure group in June 1986, but little more then 2 years later, the company stated that it was no longer viable despite an increase in takings and  a 700 strong petition to keep it open. It was operated by that company for nearly 9 years until closure on 27th April 1995 when it then lay unused. 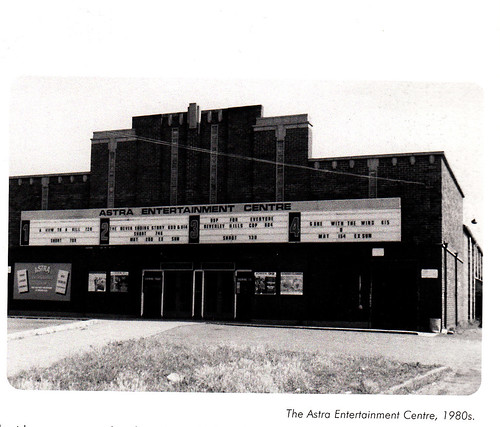