The Local press of December 1913 reported that a decided acquisition to the places of amusement in the district had been made with the opening of the Palladium, a purpose-built cinema, described as the finest in the locality, handsomely decorated, furnished and fitted regardless of expense with all the latest appliances. With the front of the building entirely of glazed white stone. To the left of the building was a covered walkway for the patrons to enter the front stalls, and also to the right of the building was a glass canopy for patrons of the balcony or rear stalls.  With a revolving door leading to the foyer, carpeted in rich blue and white.

The auditorium  with seating for 905 patrons was also decorated in colours of blue and white.  The Palladium was well attended being situated the north end of Liverpool docks as there was no competition.

It opened on Christmas day 1913 at 2.45pm and 6.45pm by the proprietors.  The admission prices were 3d, 6d, 9d and 1/- with matinee performances on Monday, Wednesday and Saturday were all patrons received a cup of tea free of charge.  In 1922 it came under new management and the programme became continuous.

It was the last cinema in the area to show sound films however the Western Electric sound system was installed for the opening of talkies on 8th December 1930.  Around this time other cinemas had opened in the area leaving the Palladium open to competition.  In 1949 it was taken over by Crosby Entertainments Ltd who made various improvements including a new GB Kalee 21 projector and sound equipment.  This didn’t help sustain the declining audiences and so in 1959 showed it’s last film The Seventh voyage of Sinbad and The case Against Brooklyn.

After closure the building was used to store Tobacco until the owners vacated it then used to as a store for refrigerator sales and then as a sauna and solarium. 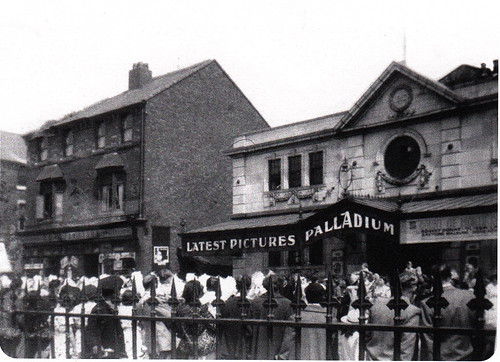