The Carlton Theatre had a grand opening on 11th June 1932 by the Lord Mayor of Liverpool, Alderman J.C. Cross.

It was designed by architect A.Ernest Shennan and the largest super-cinemas of the 1930’s in Liverpool and the most striking of his work.  Situated on West Derby Road with the frontage on Green Lane spanned the cinema with a impressive steal canopy.  Five pairs of swing doors gave access to an attractive foyer, the flooring was manu-marble the pay-box was central and on either side was two pairs of doors leading to a large foyer the main feature was a large, gold edged sun ray.  The cinema also had a stylish cafe that carried a Chinese theme of willow -patterns in a series of etched class panels in the walls with the main colour scheme in jade. The Carlton was tastefully decorated throughout.

Opening on 11th June 1952 with a British comedy My Wife’s Family starring Gene Gerrard and Muriel Angelus, with a full supporting programme including Pathe Gazzette and organ interludes on the Christie organ.  It had seating for an audience of 1,280 seats in the stalls and 660 in the circle. This popular cinema  was attended by large audiences.  Performances were continuous and during the war, due to the 10pm closing time they were continuous from 2.00pm instead of 2.45pm.

The Carlton was one of the leading cinemas in Liverpool because of it’s added attractions such as, in the early 50’s around the 20th anniversary, this was marked by a special Birthday week, in addition to the main feature, there was a stage show for 30mins, with organ accompaniment and a special souvenir programme that included an address to the patrons. In the centre of the orchestra well was a lift for the three-manual Christie organ console encased in polished walnut with gold bronze mouldings.

The projection room was hardly given a thought but in the Carlton Theatre it was designed on very generous lines with access to via a separate door on West Derby Road via a metal staircase which also lead to the first floor.  Most ABC cinemas equipment consisted of Ross projectors and RCA sound equipment.

By the end of the 50’s it had lost two of the main elements; the organ and the cafe.  The decline of the audiences continued and resulted in reduced opening hours.

The cinema became known as the ABC in December 1962 and closed for reconstruction and on 22 January 1972 and re- opened  27th March 1972 with a licensed bar and was now a single screen with seating for just 636 and styled as a luxury lounge.

Surviving for another 10 years but with cinema admissions still in decline it closed on 4th December 1982 with the film Cat People. After closure it became unused and derelict, a very sad end for what was one of the finest cinema- theaters in Liverpool.

Two lady friends, one a ‘Teddy Boy’ share their cinema days of going to the Magnet, Cameo, Carlton and the Regal.

Opening as a theatre in 1905 on 24th April, with Tally Ho! a spectacular equestrian revue, starring George Formby snr.

There is no question that Frank Matcham produced a masterpiece of architecture with his design for the Olympia Cinema.  The cinema is one of Liverpool’s treasures and was described as an Edwardian Jewel. The site once occupied an asylum and prompted a comment that Moss & Stoll must have been mad to open a music hall so close to the Hippodrome, even though they owned the successful Empire theatre in the city centre which was close by.

The outside of the building resembled a look of the  Italian Renaissance with red brick and stone dressings. The central entrance was divided into four archways, with two larger ones in the centre, above was a steeply-roofed glass veranda, on the front of which the name Olympia appeared.

The auditorium had carved plasterwork in an Indian style with the main colours cream, red, blue and gold.  A huge proscenium with a stage that was second in size to that of Dury Lane, a main feature of this was a 42ft in diameter arena, which could quickly be replaced by a lake containing 80,000 gallons of water, with fountains for special effects during aquatic displays.

The Olympia did not become a cinema until 1925 showing Thief of Baghdad starring, Douglas Fairbanks, also Jack Dempsey in Society Knockout, the Grand National and special events. With music accompaniment from a 24 piece Orchestra.

It is recorded that the theatre for all it’s great entrainment offered it did not pay it’s way even with a change of manager was still unsuccessful. The Olympia was taken over by the Savoy Cinemas Ltd, who converted it into a super cinema, with some adjustments and better site lines which meant  a reduction in seating capacity to 3,400 from the original 3,750 including stalls, upper circle and gallery.

For the next 4 years there was regular variety on the stage as supporting programmes to the film, but the Olympia reached its peak of success in 1929 as the first cinema in Liverpool to be converted to permanent ‘talkies’.

For the first time in years the enormous seating capacity was insufficient to accommodate the vast crowds, despite four separate performances daily with the queues stretched so far that those towards the back were out of sight of the theatre.

In 1929 the Olympia was leased to ABC, who also took over the Prince of Wales, these being the first two of the company cinemas in Liverpool with a regular programme of film bookings and the addition of variety acts, which were presented again after the novelty of sound had ended.

This continued until the mid 1930’s with the size of the building becoming a disadvantage and closed in 1939 with Stablemates, starring Wallace Beery, Mickey Rooney and Girls’ School starring Anne Shirley and Ralph Bellamy.

The building was used as a navel storage depot during the war.

in 1949 Mecca Ltd opened it as the Locarno Ballroom but in august 1964 converted it into a luxury bingo casino. The bingo closed in 1982 due to a major redevelopment in the area and reopened by Mecca on 9th April 1987 after a £150,000 refurbishment.

The Palladium Cinema was situated in a populated area on a main road it was advertised as the most palatial and comfortable picture house in Liverpool.

The auditorium had a seating capacity of 905 in the stalls and 250 in the curved fronted balcony that extended over the stalls and was attractively decorated.  In front of the stage was an orchestra pit for the musicians accompanying the silent films taht were shown by GB projectors.

The cinema opened on Whit Monday 10th May 1913 with an all-star programmed headed by the feature film The Penalty (exclusive to Liverpool), with a full musical programme by the Palladium orchestra. Orchestral accompaniment continued until the silent era ended on 17th April 1930.

Admission fees were 3d, 6d, and 1/-, and on occasions the managing director of Liverpool Palladium Ltd, Don Ellis would provide variety acts, while afternoon tea was being served in the stalls.

Improvements were carried out during the 1930’s, with the first closure in 1935 alterations included a new carpet making it the most comfortable cinema in Liverpool. It closed again in April 1939 for almost 3 months with more costly improvements including, new seating, carpeting and decoration, as well as new projectors and the very latest Western Electric Mirrorphonic sound system.

Opening in a Grand style on 10th July 1939 at 2pm, with the double feature Broadway Musketeers featuring Margaret Lindsay and James Ellison in Next Time I Marry. It was described as a family cinema that proved among the more independently run cinemas.

The decrease in attendances during the 1950’s was given a welcome boost with the installation of CinemaScope and magnetic stereophonic sound. With the first screening on 26th September 1954 with The Robe starring, Richard Burton and Jean Simmons.

The Palladium became known for showing epic films however after 13 years, closure by compulsory purchase order was issued due to connection with a road widening issue.  The owners and hundreds of patrons signed a petition desperate to keep the cinema open. The petition was personally taken to number 10 Downing Street by the manager, Geoffrey Manders.  Sadly this was unsuccessful and the Palladium on the last screening saw hundreds of pensioners, parents and children crowd the auditorium for one last time on Satureday 1st July 1967 to watch the epic film The Ten Commandments, starring Charlton Heston.

So ended the history of the Palladium after 54 years, with the impression that it would be greatly missed, especially by the older regulars.

Just beyond the city area was the Savoy Cinema, built on a corner site near end of Brougham Terrace. The cinema was between Liverpool’s two largest theatres, the Hippodrome and the Olympia.  An imposing structure however handsome and with attractive decoration inside.

The orchestra pit was screened by a bower of plants and flowers giving cover for the musicians accompanying the silent films.

Reported in the Kinematograph Weekly 24the December 1914 that the seating had been given top priority as the balcony was rather large but the seating capacity was only 890.

The first licence was granted on 15th December 1914 with the opening film Called Black, booked and projected by Mr Moser.
Admission fees were 4d and 9d at continuous performances from 6.30pm – 10.30pm with separate shows on a Saturday at 6.50pm and 9pm and a daily matinee at 3pm.

The Savoy Cinema was one of a few in Liverpool to present Edison Kinetophone Talking Pictures.

The cinema was taken over in 1923 by the Liverpool circuit of Edwin Haigh & Son, opening with the New Savoy Orchestra. In 1926 there was another change of ownership until March 1928 when it was taken over by GTC in the amalgamation of Companies under GB.

In the 1930’s the Savoy had many other local cinemas surrounding it and so suffered with regard to film bookings.  Surviving for 25 years however it was among the first three of Rank to close in 1956 with a final performance on 29th September showing The Brave and The Beautiful, starring Anthony Quinn and The World in my Corner starring Aduie Murphy.

The building has since then been used for many uses such as a lino store, a car showroom and later offices.

“This was what they’d call a flea pit” 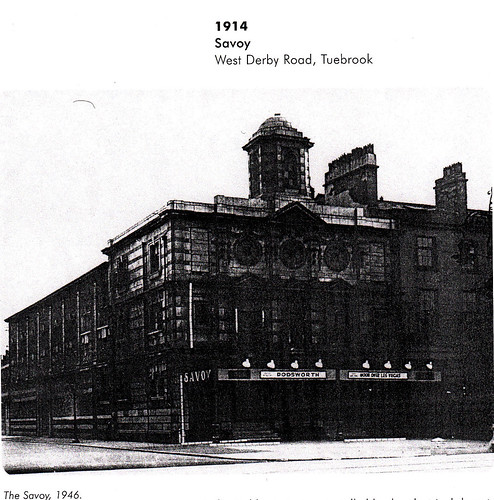