The Reel Impact of the Lost Picture Palaces.

Mike Taylor  began his career as an apprentice at the Plaza Cinema Allerton in 1959. Mike loves movies and has done since he was a young boy.

He followed his dream and worked 50 years in the business with 22yrs for the Rank Organisation.

During Mikes career working he mingled with many of the stars. John Lennon was his favourite.

Mike was one of the projectionists operating for the screening of the premiere of the critically acclaimed film by Richard Lester –  A  Hard Day’s Night.

Today, Mike is still in demand.

He is he regional co-ordinator for the Projection Picture Trust- Northwest Region, which is the parent company for the National Museum of Cinema Technology based at Bletchley Park.

Mike installed the 35mm projection equipment in Birkenhead Town Hall and makes sure it is fully maintained. The projectors are run and tested weekly. Mike loves what he does and it shows.

He  has a strong view about the future of film am he says with real passion “Cinema, as we know it is gone forever.

“The people who run the film industry today are not cinema people.

” It is run by accountants who know nothing about the technical side of the business.

“It is the end of an era – the industry is being destroyed.”

Mike and other members of The Projected Picture (Trust North West region) tour scrap yards to salvage projectors and other equipment dumped in the wake of the digital takeover.

What it took to become a projectionist

The buzz for a Projectionist.. 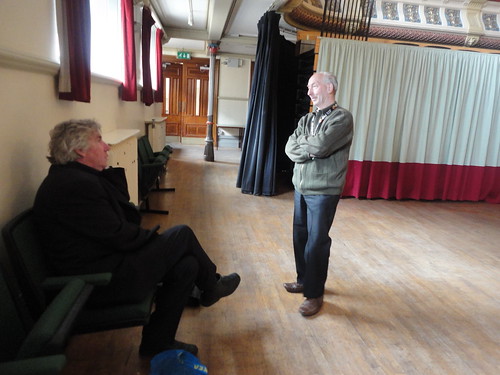