The Trocadero Cinema at the time of opening was the largest cinema in Liverpool.  It was not of the usual rectangular design but more square shape with a large circle curve near to the front which occupied a fair proportion of the area.

Although less elaborate then many of the other earlier cinemas it still presented an attractive appearance.  Opposite the entrance, at the rear of the paybox , a marble staircase with metal balustrade led up to a luxurious mezzanine lounge. All patrons had a good view of the screen and could hear the music due to a unique feature which provided an extension of the steeply raked circle beyond the rear wall of the auditorium and above the lounge.

An unusual feature of the auditorium was that it had a miniature stage either side of the proscenium, were beautiful scenic schemes were carried out by the artist of the Liverpool Playhouse theatre, these were illuminated during the intervals, attracting a lot of attention, however, in the later years they were covered by a curtain with a pelmet.

The picture-goers were treated to another novel device at the Trocadero for the screen was concaved, the main advantage for this was stated to have a telescopic effect with no distortion and no eyestrain for the viewers.

The seating space in the stalls was 831 arranged in three blocks with four gangways and with 516 seats in the circle arranged similarly.  With a relatively large space for the orchestra pit used for the musical accompaniment for the silent films up until the end of the 1920’s.

The Grand opening was on 13th April 1922, a super production of The Queen of Sheba by William Fox and starring Betty Blythe.  Performances were continuous throughout the day from 2pm – 10.30pm.  Admission prices were 1/-, 1/9 and 2/4 with each seat a luxuriously comfortable armchair.

From the mid 1920’s and for almost two years, there was Harold Gee and his orchestra.  The Trocadero became the first cinema in Liverpool to present organ interludes which began on 10th October 1927 with the mighty Wurlitzer played by the great Sydney Gustard, the well known London broadcasting organist.

In 1950 the cinema was renamed the Gaumont under the control of GB and Odeon circuits.  The company was the first to install CinemaScope with magnetic stereophonic sound starting with the Odeon in 1954 with The Robe.

Opening on 31st June 1954 at the Gaumont with How to Marry  A Millionaire starring, Marilyn Monroe and Betty Grable.

When the Odeon’s closed for conversion into duel screen cinema this gave a welcome boost to the Gaumont and attendances however when the Odeon reopened again the audience dwindled, also because of the less attractive films were being shown here.  The situation worsened with the opening of Odeon 3 and Odeon 4 in 1973. The Gaumont struggled for a further 4 months, the final performance was on 4th May 1974 with a minor x rated film, Sex of their Bodies and Love Hungry Girls. 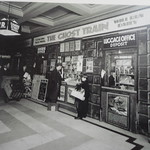 One thought on “Trocadero”